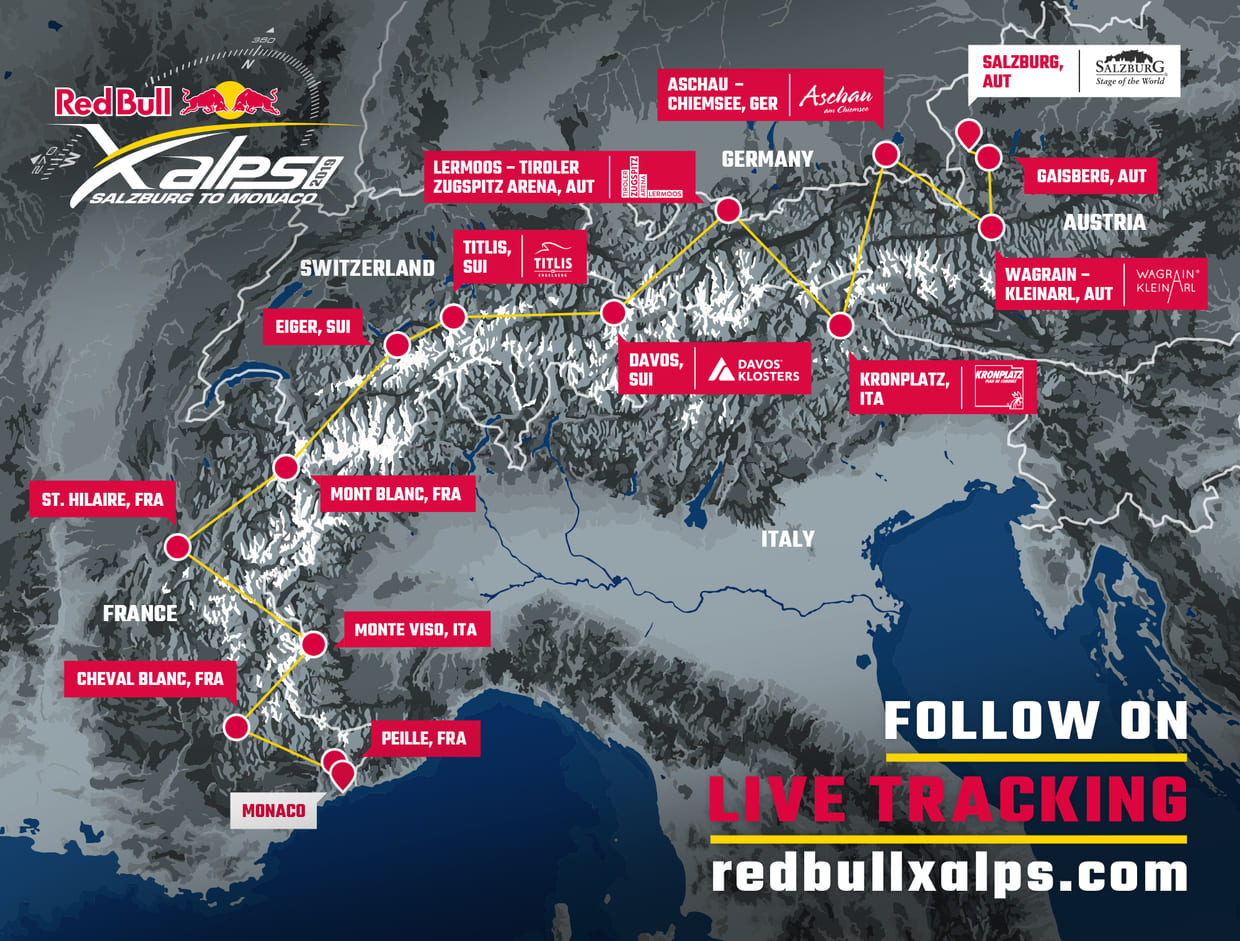 The 2019 route Red Bull X-Alps has been announced

The new route has been revealed for the 2019 Red Bull X-Alps, which will be the most challenging in the event’s 16-year history.

Racing a straight-line distance of 1,138km from Salzburg to Monaco, 32 world class athletes from 20 countries including 2 women and 30 men will hike and fly via record-breaking 13 Turnpoints in 6 different countries - including Austria, Germany, Italy, Switzerland, France and last but not least Monaco. This exciting new development will make the world's toughest adventure race even more challenging and more unpredictable than ever before. 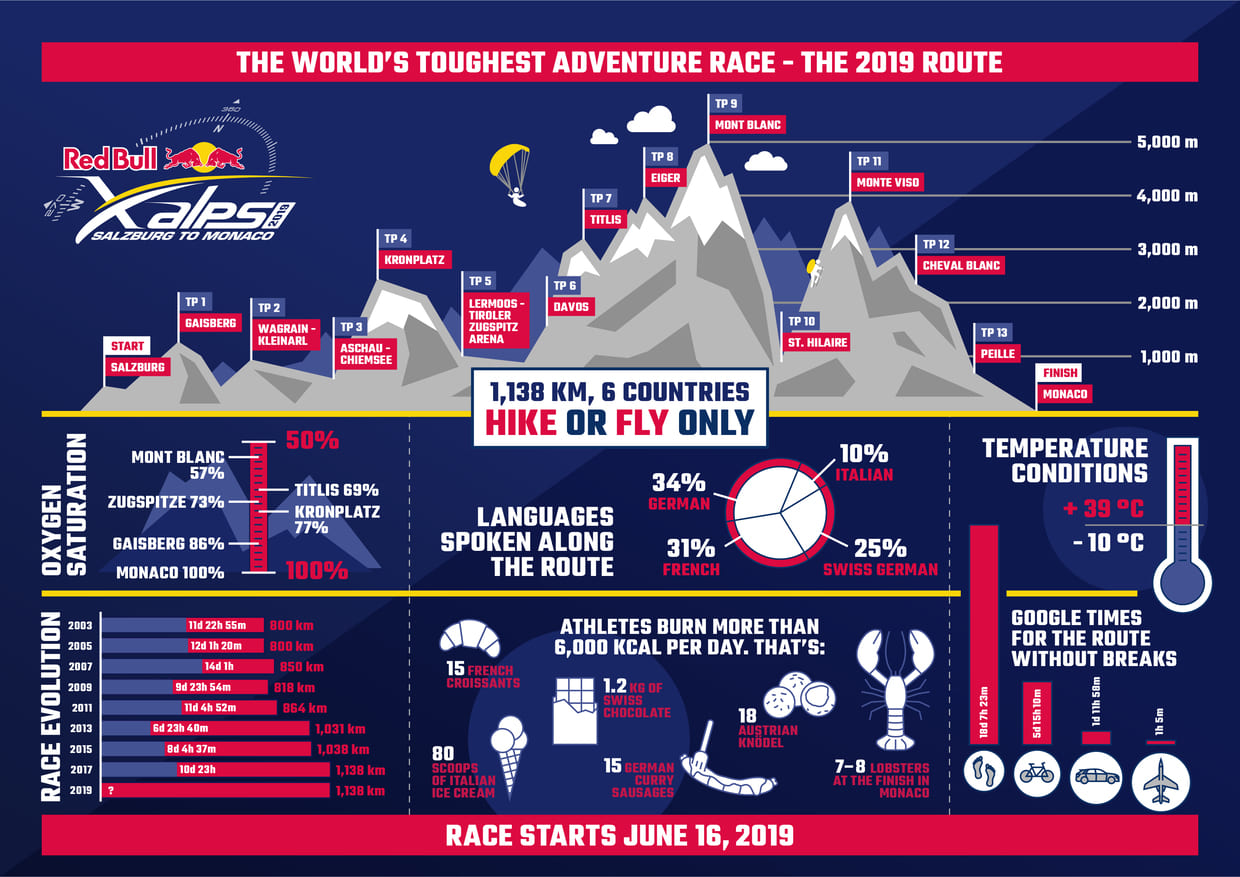 As if that wasn’t enough, the new Turnpoints in western Italy and the south of France will lead the participants to race along Europe’s largest mountain range and traverse it five times between the northern and southern as well as western and eastern fringes. Also Race director Christoph Weber says it’s going to be tough. “The race is earlier than the years before – that could mean a lot more snow in the high alpine, which could definitely slow the athletes down. If the weather isn’t good for flying, it could be a very long and exhausting race to Monaco!”

The historic Mozartplatz in Salzburg, Austria will mark the Start of the ninth edition of Red Bull X-Alps. From there, the athletes will run through the city and up the Gaisberg to Turnpoint 1. The scenic view will attract thousands of fans from far and wide, all of whom will be there to support the competitors as they set up their paragliders and embark on their first flight of the race. 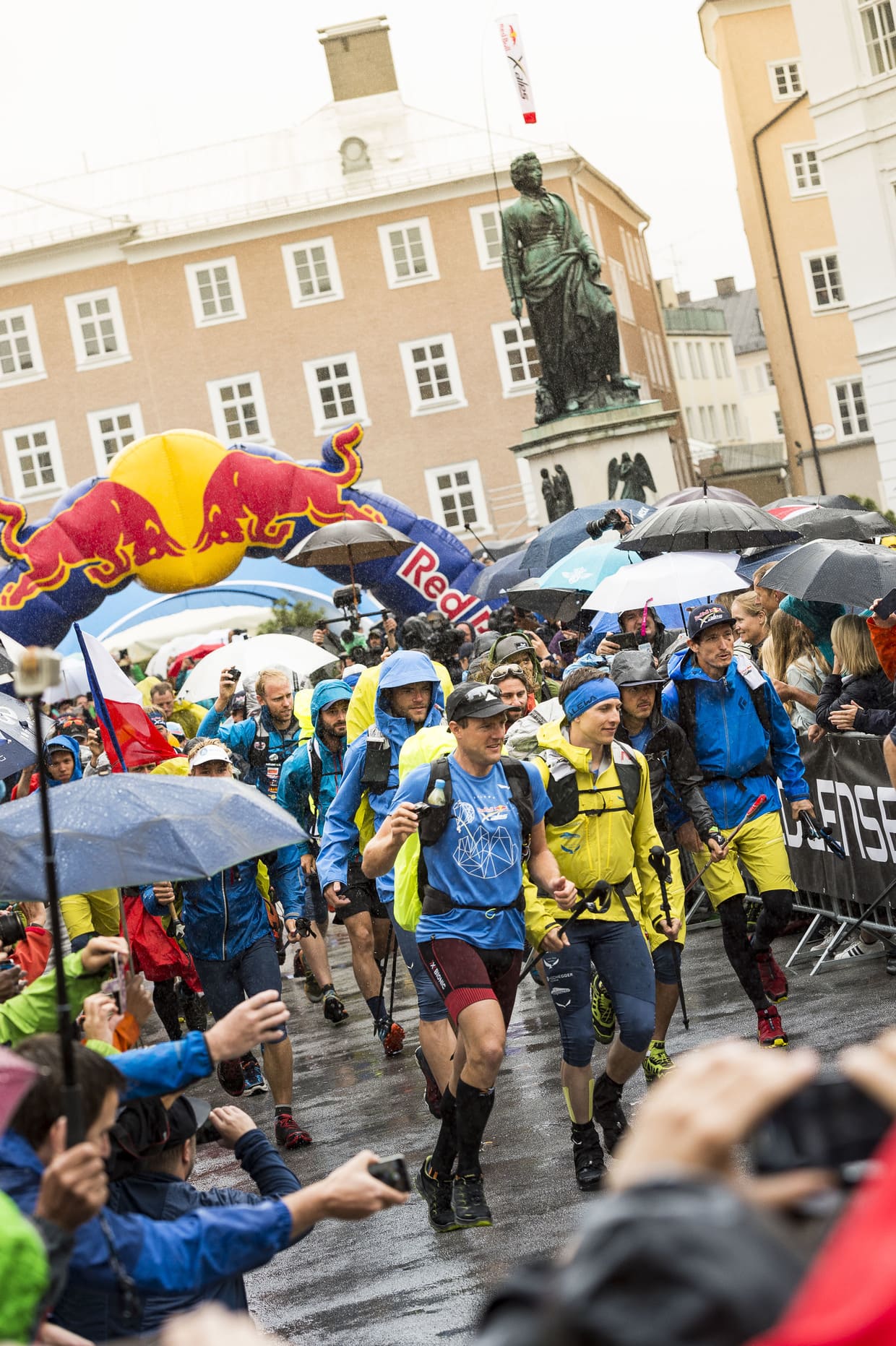 From Gaisberg the race is on to Turnpoint 2 in Wagrain - Kleinarl, a mountain holiday town in the south of Salzburg – the terrain will by then be well known from the Prologue race just days earlier. Then it’s north to Turnpoint 3 at Aschau – Chiemsee to the northern edge of the Alps entering Germany. From there it’s a big trip south to Turnpoint 4 the Kronplatz in Italy which includes crossing the almost 4,000-meter-high mountain ridge of the Alps to tag the summit and sign the Turnpoint Sign next to the famous Messner Mountain Museum.

Then it’s back north to Zugspitze, Germany’s highest summit, which has to be passed north – and from there the 32 adventurers will drop right back over the Austrian border to Turnpoint 5, Lermoos – Tiroler Zugspitz Arena. Then they’ll start really moving west. Davos, Switzerland is Turnpoint 6 and is next on the list – right beside the beautiful Davosersee. After that it’s on to Turnpoint 7, Titlis – above Engelberg, where they’ll sign the highest Turnpoint Sign of the race on a glacier at 3.200m. 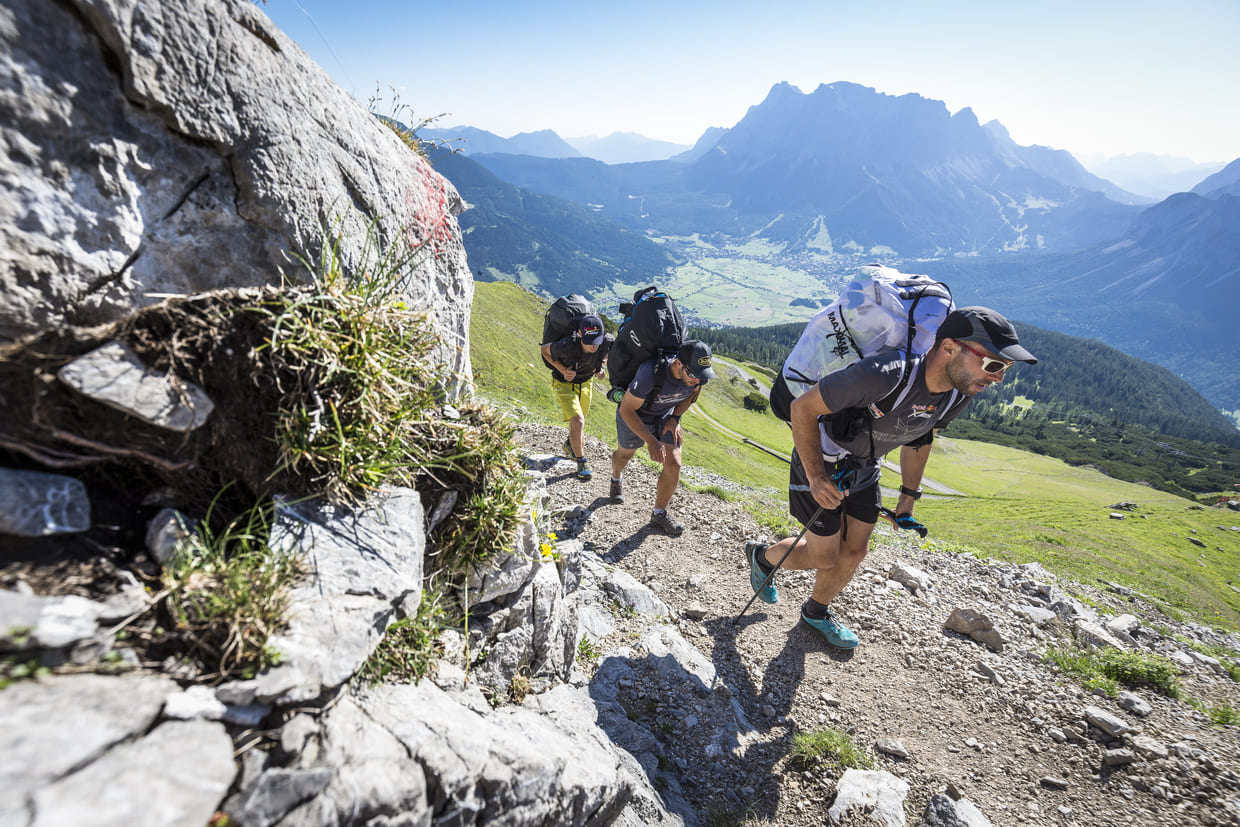 After that, the adventurers have got to pass Turnpoint 8 the Eiger, one of the most iconic mountains in the climbing world and Turnpoint 9 Mont Blanc which is the highest peak of the Alps before the next signboard at Turnpoint 10in St Hilaire, France, one of the spiritual homes of free flight sport. Then it’s on to the last big leg. Past Turnpoint 11at Monte Viso, the last big rock pyramid in Italy, as well as Turnpoint 12 Cheval Blanc, pointing their compass finally towards Peille.

In a final push, the hungry competitors will battle it out over the remaining 91km to reach Turnpoint 13 in Peillewhere the clock will finally stop. From there the athletes only have to make the 2km victory flight over Monaco to the warm, blue waters of the Mediterranean Sea. They will touch down in style on a landing float to celebrate the accomplishment and relief of completing the world’s toughest adventure race. 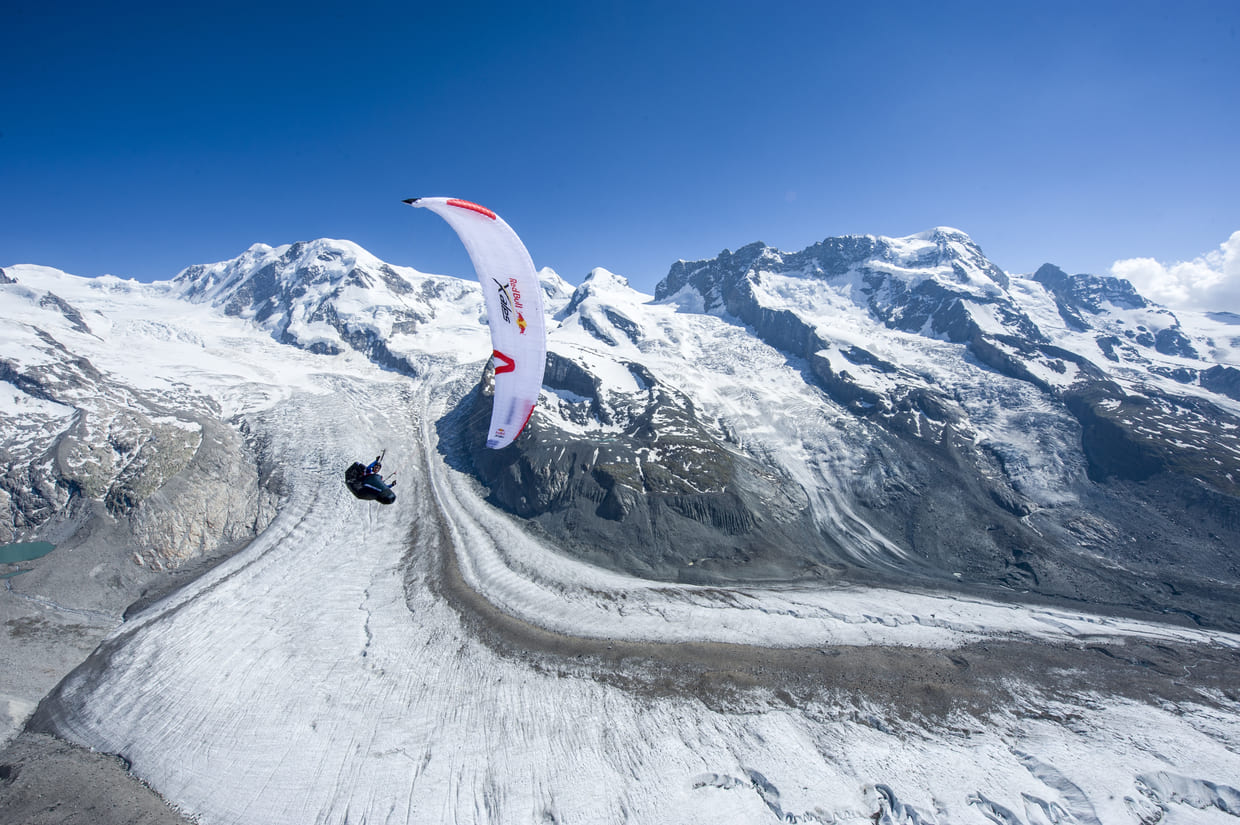 For sure the distance and the number of Turnpoints indicates that it’s going to be the toughest route
in the race’s 16-year history. From now, the athletes have just three months to prepare both body and mind for the enormous journey that lies ahead. Studying the geography of the route will go a long way, but to emerge victorious will take a whole new caliber of endurance and determination. There’s no telling who will take the title, but with some of the greatest athletes in the world, it will certainly be an adventure to remember.

Red Bull X-Alps 2019 is the world’s toughest adventure race, covering over 1,138km of alpine terrain. It will start on June 16, marking the ninth edition of the race. 32 world-class athletes from 20 nations take part in this grueling journey from Salzburg to Monaco only by foot and paraglider – their every move tracked and played out to an audience of millions via the Live Tracking. The competition field consists of 16 veterans, 15 rookies and one defending champion who will be looking to add a sixth consecutive victory to his resume. 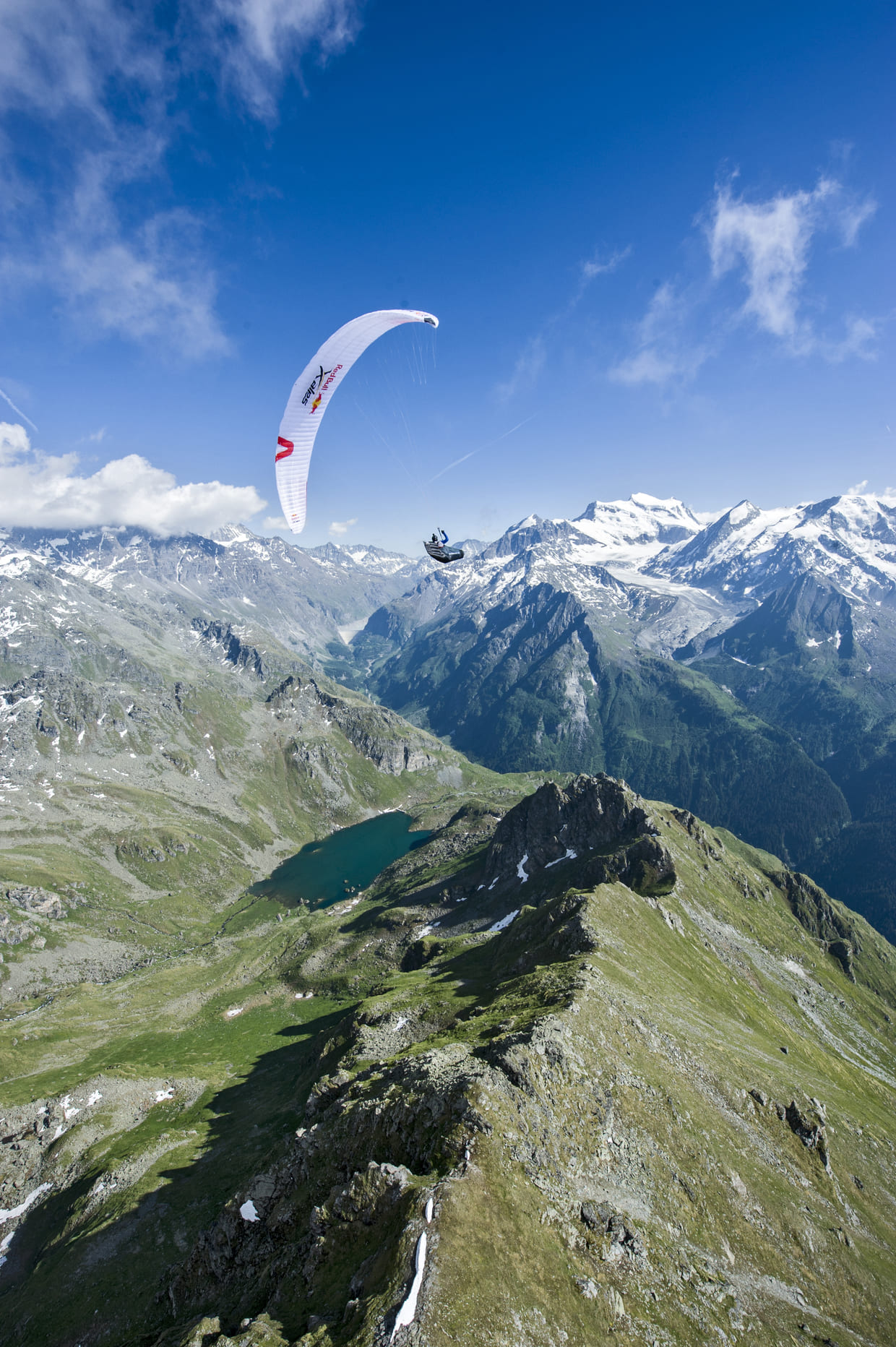 Along the way, the athletes will pass 13 Turnpoints in 6 different countries. Prior to the main event, the one-day Prologue race will see athletes jostle for a prime position. The top three finishers will earn themselves an additional Night Pass; allowing them to continue onwards once through the mandatory rest period.

This year’s route brings the racers into both familiar and new terrain – but you can count on every single day showing us rocky ascents, dizzying flights and crucial, strategic decisions – a challenge for body and mind. With a more demanding route than ever before, Red Bull X-Alps 2019 will be full of drama, adventure, and high-alpine action. The winner will need to be smart, strong, a master of both planning and reactivity – and have a little bit of luck. Red Bull X-Alps 2019 is the world’s toughest adventure race – and it’s starting soon.