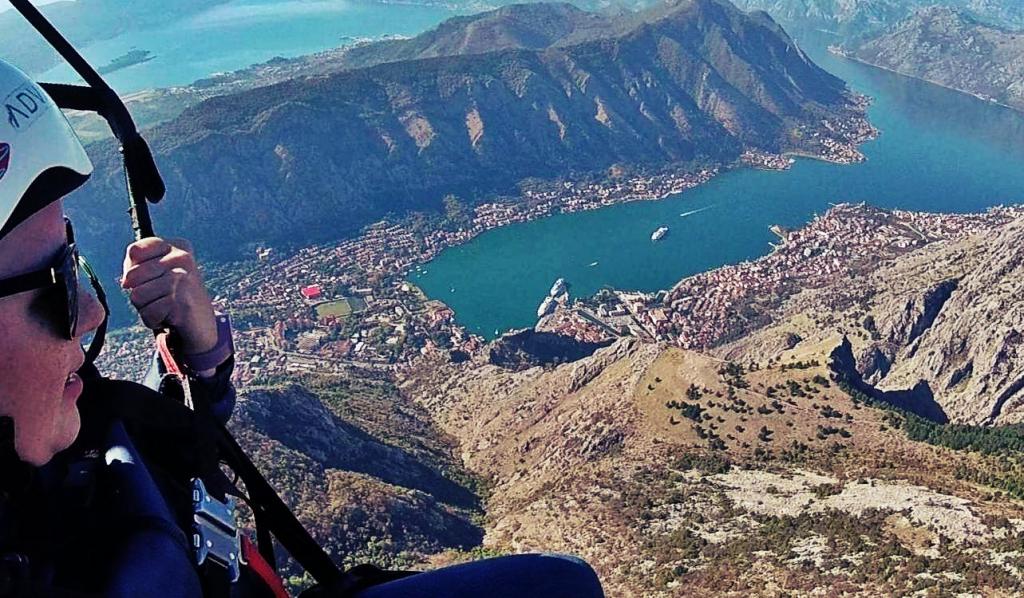 We invite you to make a great paragliding adventure in Kotor Bay.

This is an amazing opportunity to make an incredible active holiday and see Kotor Bay, the old town and Kotor fortress from the height of paragliding. This activity is suitable for everyone who wishes to receive unique sensations and unforgettable impressions.

Kotor Bay is an amazing place in Montenegro, attracting millions of tourists. The soft smooth surface of gentle water, bordered by strong embraces of mountains and ancient houses, is a fresh breath of beauty among medieval buildings. Kotor will appeal to connoisseurs of art, ancient cultural sites and, of course, active sports. Fly for adventure!

The Bay of Kotor is located in the wonderful town of Kotor, which is known for its special status. In addition to the medieval houses, tourists are seduced by fabulous landscapes, conquering panoramic views and a riot of greenery. Kotor was built in ancient times, was part of the Roman possessions, part of the Byzantine Empire.

“The Bay of Kotor is the pearl of Montenegro. The tiled roofs are coloured in orange colours, which stand out clearly against the backdrop of lush greenery and soft merengue waves. ”

Ancient fortress - the memory of the desire to be free. The city walls were built due to the fact that the town was very attractive to the conquerors. To protect themselves from uninvited guests, a fortress was built, the thickness of the walls of which varies from 2 to 16 meters. The total length of the fortress walls is 4.5 km.

Besides the old fortress, Kotor is rich in other beautiful sights:

In order to fully enjoy the beauty of Montenegro, the town of Kotor and its many attractions, it is not enough to stroll through the narrow streets and overcome the 1400 steps of the old fortress. It is proposed to see orange tiled roofs, churches, cathedrals, temples and the Bay of Kotor from above! paragliding in tandem with an instructor is the right decision to get an adrenaline rush and see the beauty of Europe’s environmentally clean area in all colours.

“A distinctive feature of paragliding is the feeling of irresistible freedom. A person feels blissful, feels on the same wavelength with birds and enjoys the most beautiful views of Montenegro while the instructor controls the aircraft. ”

The quality, speed and safety of the flight are guaranteed, which are combined with unforgettable emotions, which will allow you to remember the trip to Montenegro in the most magical episodes!

A paragliding flight in tandem with an instructor is an opportunity to see the ancient values ​​of the Old Town of Kotor and the Bay of Kotor as if in a picture.

The demonstration flight in tandem is carried out within the framework of the non-profit paragliding development program in Montenegro.

Transfer from the pick-up point in Kotor included.

Video from GoPro immediately with you, sd card included - 10€

Summer paragliding camping
Paragliding wild beauty and great active recreation with the whole family!
Read More
Plan what to do in Petrovac with an itinerary including Paragliding4.me