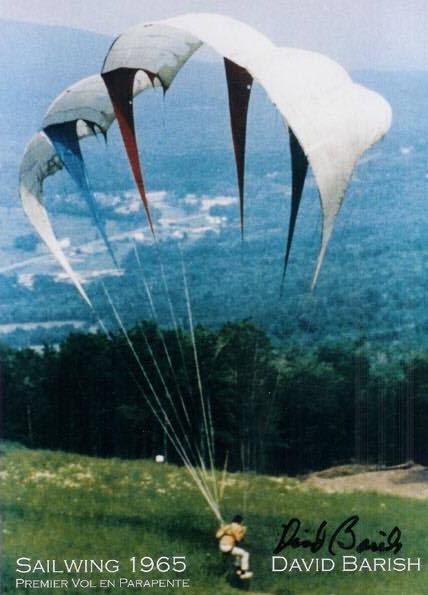 From the history of the paraglider

In the 1960s the army needed to train paratroopers in safe landings.

And in order to exercise as many landings as possible in one day, it was decided to attach the paratroopers to the truck with the help of a tow rope and after gaining the necessary height, the tow rope was detached from the paratrooper so that it fell back to the ground. Many skydivers later became more interested in the hover process than the moment of landing.

Then, for fun, they launched themselves from steep hills and parachuted to the ground, experimenting with how they could use air currents to stay in the air for as long as possible.

Very soon this fun became a sport and began to gain momentum with the invention of a parachute opening from the incoming air, also now known as parafoil. Designed by Domina Jalbert in 1964 such a parachute became known as a wing or a dome and was divided into cells. As soon as the dome caught the wind, air penetrated into these cells, inflating the wing. The shape acquired after filling allowed the wing to slide further.

Modern paragliders have changed a lot since then and today they are considered ultralight aircraft. A full set of equipment can weigh from 8 to 20 kg and allows the pilot to fly at speeds from 20 to 70 km / h. Glide ratio 10/1. Significant improvements in design and performance today allow pilots to stay in the air for many hours at a time and fly hundreds of kilometers per flight.